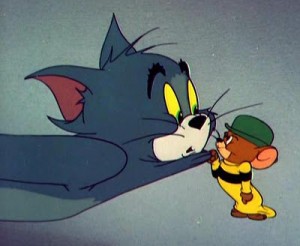 If you ever happen to see a tiny mouse walking by a vicious street cat acting all confident and fearless, keep in mind that this mouse may not be genuinely courageous, but instead, is most probably infected with a parasite. New findings suggest that a Toxoplasma gondii parasitic infection in mice could make them permanently fearless of cats.

Researchers Wendy Ingram, Michael Eisen and Ellen Robey tested how infected mice reacted to bobcat urine (which they are known to commonly steer clear from) in comparison to their reaction to rabbit urine, which mice usually do not react to. And the result was as follows: mice were less fearful of cats for at least four months post-infection.

Wendy Ingram-University of California graduate student involved in the study stated that:

“Even when the parasite is no longer in the brains of the animals, some kind of permanent long-term behavior change has occurred, even though we don’t know what the actual mechanism is”

It was reported that this parasite does not only brainwash mice, but is also known to have its health risks when infecting humans. T-gondii is known to infest the intestinal tract of cats that eat infected mice, where it sexually reproduces and continues its life cycle. And since the new host is known to be very commonly present in our lives and environments, humans become very prone to having these parasites transferred into our systems. T-gondii can actually cause death to hosts with a weak immune system, and may also cause abortion in pregnant women.

Further effects of T-gondii in humans have been tied to personality and behavioural changes. An association between T-gondii and certain neurological disorders was noted, but not yet confirmed. For instance, acute infection with T-gondii has been found to cause symptoms similar to those displayed by people with schizophrenia. However, Ingram is not sure whether T-gondii infection may cause schizophrenia like symptoms, or if people with schizophrenia are more likely to get infected with the parasite.

New research is warranted in this area to explore the parasite’s effect on infected humans and different animals (infected mice, carrier cats), as well as confirm/refute the links with other disorders and behavioural changes in humans and animals.