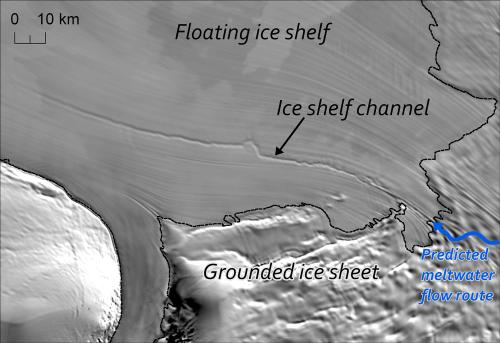 There are numerous landscapes resting under the deep sea level and across the poles that are untouched and yet to be discovered by humans on the planet Earth. Volcanoes have been discovered lurking under the oceans and now, researchers have come across beautiful and magnificent ice channels under the sheet of frozen ice.

Antarctica possesses the enormous ice channels underneath a floating ice shelf. If we talk about measurements, it would surpass the Eiffel Tower, said the research scientists. Team behind the study is hoping that this discovery would be a stepping-stone in determining the reaction of ice under shifting environmental conditions.

Images from satellites and airborne radar exposed the presence of channels under the ice shelf and on its surface. Researchers were able to make an intelligent guess to the path taken by the melting water under the huge iceberg.

Unlike a thin layer – as it was conventionally proposed – the flow of water is quite focused like that of a river, moving in one direction. It is because of this movement, the ice sheet is seen making a move hence, the movement of underneath water determines the speed of the entire ice sheet.

For future, the researchers, envision that the understanding the behavior of ice sheet and its contribution to sea level could be reached by determining how the under water system works. In the words of Dr Anne Le Brocq,

Landscapes of such order have been discovered before as well but then the phenomenon was thought to be an oceanic process and not the meltwater consequence. Such a finding would provide light to the entire water flowing process and its future implications with respect to land as well as ocean. After all, global warming alone is not responsible for melting of the ice sheets.