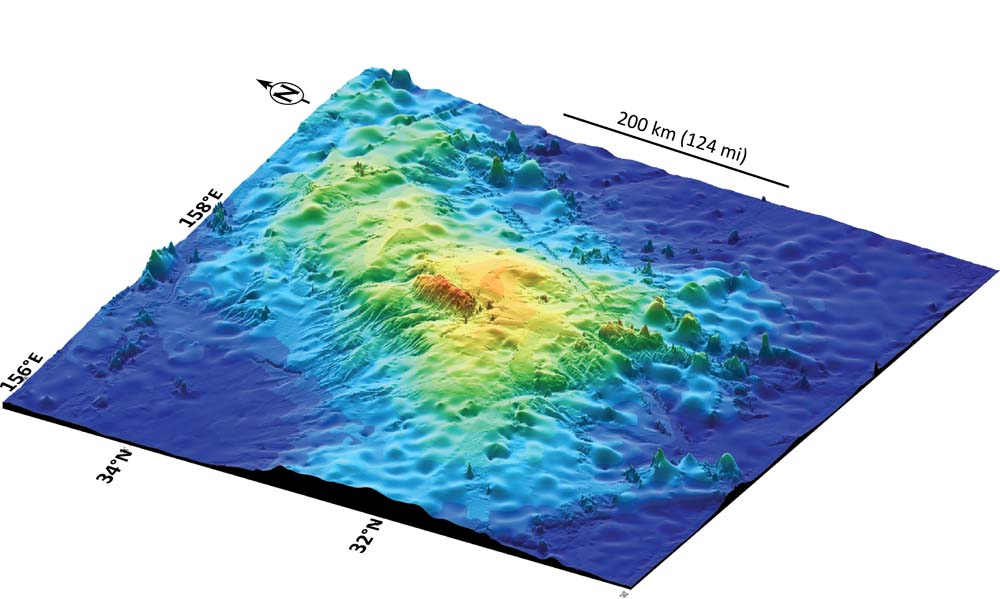 A team of researchers from A&M University has discovered a giant volcano resting under the surface of Pacific Ocean, which first they thought to be remnants of multiple volcanoes. Tamu Massif the extinct submarine shield volcano is to be found in the northwestern Pacific Ocean.

Surface area of the gargantuan is about 120,000 square miles with peak 2.2 miles high, somewhere around five and a half Mt. Everests hence, eclipsing the current largest subaerial volcano, Mauna Loa on the Hawaiian Islands.

It’s probable dead as of now, advocated the researches with its last eruption occurred around 114 million years ago. As per the geophysicists, Tamu Massif was in its heyday during Late Jurassic to Early Cretaceous period and then it became dormant.

As per the rock samples and seismic profiles, the huge structure and ‘flank slopes’ of gargantuan is the outcome of its lava emanation from its centre over the time but the gaps in the profile doubts its credibility of having more than a single colossal volcano.

What is unusual about the volcano is its slope – it’s not high, but very wide, so the flank slopes are very gradual. In fact, if you were standing on its flank, you would have trouble telling which way is downhill. We know that it is a single immense volcano constructed from massive lava flows that emanated from the center of the volcano to form a broad, shield-like shape,  Dr Sager said.

Its shape is different from any other sub-marine volcano found on Earth, and it’s very possible it can give us some clues about how massive volcanoes can form. An immense amount of magma came from the center, and this magma had to have come from the Earth’s mantle. So this is important information for geologists trying to understand how the Earth’s interior works, he concluded.

The sea floor is already saturated with numerous underwater volcanoes or seamounts but no one stands out distinctly with its shape and size as clearly as Tamu Massif does.