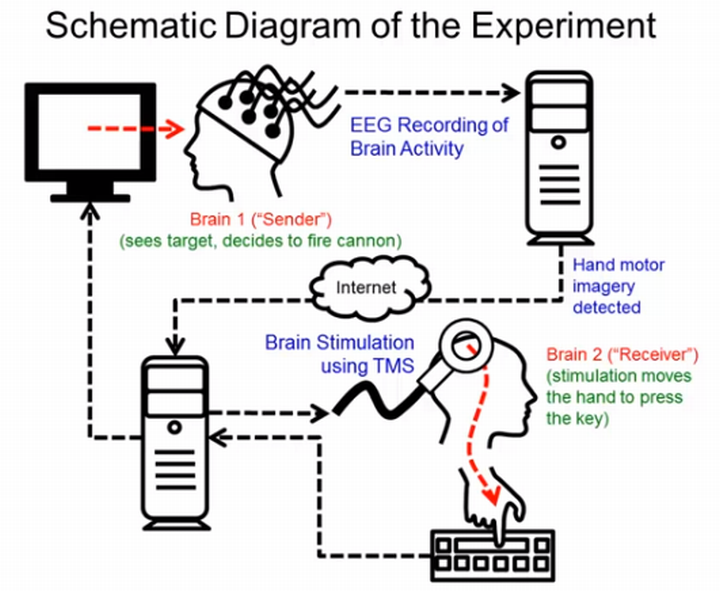 Researchers at the University of Washington have come up with the first noninvasive human-to-human brain interface. With the help of electrical brain recordings, one researcher was able to control the hand movement of fellow researcher via internet.

Rajesh Rao was wearing a skullcap enclosing electrodes, which was further connected to an electroencephalography (EEG) machine. This EEG machine was perceiving the electric impulses of his brain.

While on the other hand, across the campus, Stocco was connected to a transcranial magnetic stimulation (TMS) machine via swim cap. This machine is capable of introducing slight electric current that can cause activity in specific or general parts of the brain with minimal discomfort. In the experiment, the coil was placed above Stocco’s left motor cortex, area of the brain that controls the hand movements.

Same video game was flashing in front of their screens. A point came where the player must tap the spacebar to shoot down a rocket. Rao didn’t do any physical action rather visualized of doing it. The EEC machine picked up the impulse and transmitted the signal to the TMS in Stocco’s cap.

As soon as the coil received the signal, the left motor cortex did a nervous tic, consequent upon which, his hand made a move causing cannon to fire in the game and successfully shooting down the rocket.

This technology is limited to comprehending only simple brain signals and not complex, neither can it be substituted to control actions against the will of a human being stressed Rao.

Brain signals would supersede the barrier of language. People would be able to convey their message without knowing the basic of foreign language.

People with disabilities would be able to communicate their requirements for food, water etc.

In case of incapacitated pilot, flight attendant or passenger might be able to land the airplane safely.

Let’s say if the researchers are able to communicate with the complex brain impulses and are able to control the thought processes, it would then be easier to transfer knowledge too.

Another approach is helping the paralyzed people in getting back their reflexes or moving their limbs. It could be the second level of this breakthrough research.

Technology is taking giant steps, the world is not same at it was fifty years ago. And is at the verge of breaking into completely new realm within the next hundred years or so or possibly before that. Many of us feel completely lost and handicapped without tech products. In the name of progress, we are moving towards becoming bots ourselves.