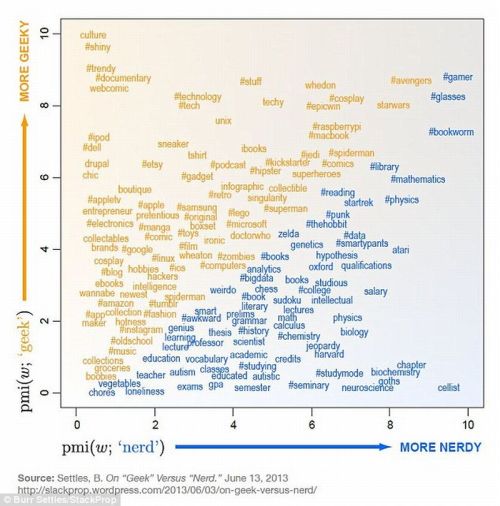 Geeks are more interested in brands and so they talk about it with names, literally that is. On the other hand, nerds would talk on a more specific level. Their view of things would be depth oriented while it’ll be more broad with respect to the former.

Software engineer Burr Settles from Pittsburgh scanned over 2.6 million tweets that came upon looking for the terms ‘geek’ and ‘nerd’. Based on his research, he formulated an equation, which determined the possibility of a specific word coming in geeky tweet or a nerdy tweet.

To make it simpler, the engineer came up with words that were frequently used by Geeks and Nerds respectively. Then he plotted a graph keeping the words on x-axis and y-axis. Along the vertical, or y-axis, a word appeared, it would be tagged as being geeky and vice –versa.

For instance, top words hitting on the geeky side of the graph were ‘culture’, ‘shiny’, ‘trendy’, ‘documentary’, ‘webcomic’. While the nerdy end of the scale reads ‘gamer’, ‘bookworm’, ‘library’, ‘mathematics’, ‘physics’ and so on.

In the words of Settles,

If we talk about the meaning, geek is synonymous to nerd. Respective meaning is derived as per observation. The study cannot be considered hundred percent true. It was based on tweets and has limitation hence works on the probability theory.

One Thought to “Geeks Are Fans But Nerds Are Practitioners”