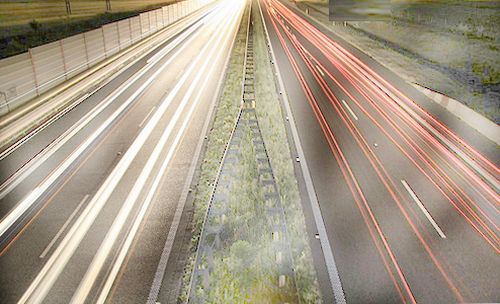 Internet across highway, this is what the transportation system in the UK is planning to achieve in the near future.

The busy A14, a stretch of eighty kilometers, would soon be sodden with sensors for observing traffic by transferring signals to mobile devices in moving cars. In the words of Ofcom, telecoms watchdog,

Sensors in cars and on the roads monitor the build-up of congestions and wirelessly send this information to a central traffic control system, which automatically imposes variable speed limits that smooth the flow of traffic. This system could also communicate directly with cars, directing them along diverted routes to avoid the congestion and even managing their speed.

Total plan involves £1.5bn that would be covered via toll. To start with, the project will collect info on car drivers and later on heavy goods vehicles. Database of the collected information is then created and db access will be granted to the department for Transport only.

The entire plan of futuristic transportation system sounds revolutionary. The technology would surpass all pervasive traffic problem and at the same time would be the stepping-stones for a making the self-driving car a reality.