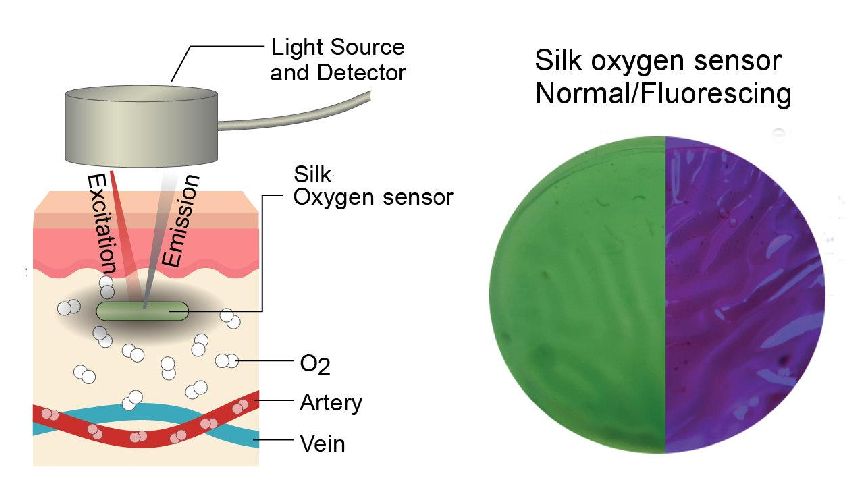 Soft skin sensors are beginning to transform the health care industry. We can surely predict that within a decade, people will be wearing skin sensors to detect the blood glucose level, oxygen level and to track other different blood components which currently require an incision.

Researchers at Tufts University have developed a tattoo-like sensor that glows when exposed to light. The degree of brightness depends on the level of oxygen in blood.

The sensor is made up of silk fibroin hydrogel. Fibroin is an insoluble protein that is obtained from silk produced by insects such as silkworm and moths.

It is due to its insolubility, the re-assembled gel is used in various biomedical applications like tissue engineering, implantable devices, and disease models. Later when the film does break down, it does not invoke an immune response, rather it becomes compatible with the body.

Certain health conditions require constant monitoring of blood components such as glucose, lactate, electrolytes, and dissolved oxygen. All these require bulky machines and invasive technique. Engineers at Tufts University want to tackle this problem head-on, therefore, they came up with tattoo sensor. The novel sensor will track all these and more components noninvasively and consistently.

Dr. David Kaplan, the lead investigator said that the innovative sensor is not only biocompatible but it can also hold additives without changing their chemistry. The additives can enhance the sensing abilities to track molecules in their environment.

At present, the innovation can only track the oxygen level in animal models in real-time. Researchers are looking forward to add more parameters so that the sensor can detect multiple blood components monitored over a long period of time.

When the tattoo sensor comes out of the lab, it will be a boon for people suffering from diabetics. They often have to draw blood to check the glucose level just before the meals. With the new sensor, monitoring will become more convenient and less painful.