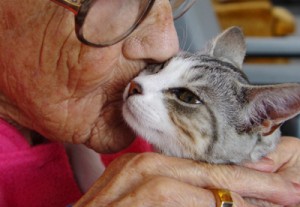 Humans can be sorted into two categories; those who like animals, and those who don’t. For those who like them, animals could be of much more benefit than what was once known in the past.

While animals were previously depended on for transportation, food, and the making of clothes, the human-animal bond has been given serious attention by scientists in the last 30 years, revealing a totally new perspective on how animals could be further used for our benefit.

Apparently, there is much more to petting an animal than just providing a couple of “feel-good” minutes to the individual. Research conducted in the last few decades has been exploring the physiological, intellectual, psychological and social-emotional effects of positive human-animal interaction.

Growing up with a companion animal can save infants later on from developing pet-allergies specific to the type of animal they grow up with. According to conducted research, this is valid when the child is exposed to an animal in their first year of life. Asthma is also one of the studied health problems that is judged to be less probable when exposed to pets during infancy.

The type of tactile input received by a child stroking an animal’s fur is also found to contribute to providing a basic foundation for the development of a well modulated tactile system. Further, when a child takes care of a companion animal, she/he learns how to partially or fully take on the role of a care taker, which is essential in preparing children for a significant future life function. She/he may also learn to communicate with that pet; talking to it, and petting it in times of distress- There is no better listener than an animal who gives a child their full attention, and does not judge them in any way.

All these studies made room for further use of animals in therapeutic settings. Therapy animals have been introduced to people with special needs or psychological/psychiatric disorders, as well as older adults in senior homes. New organizations and institutes were established over the last few years to train therapy animals and send them to senior homes, centres for special needs, psychiatric hospitals, and hospitals where people from different ages lay sick in beds. All of these experiences provided nothing but more evidence of the success of such therapy programmes where trained animals are involved in humans’ healing process.

Relative studies and information on the subject could be found compiled in a publication issued by the Society for Companion Animal Studies (SCAS)-Plymouth/UK under the title: Children and Pets- A guide for parents, teachers and therapists.

One Thought to “The Human-Animal Bond: A Healing Power Revealed”