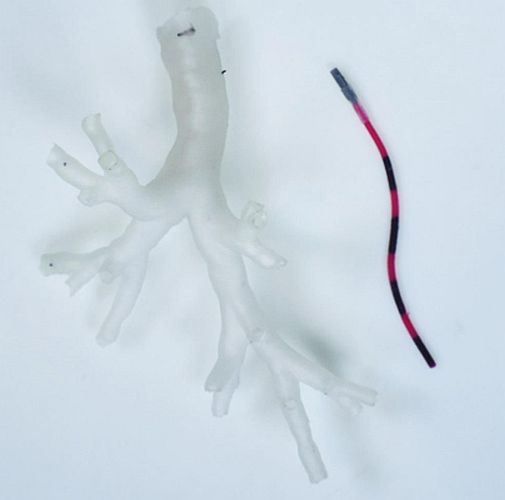 Magnetic tentacle robot, strange it may sound but researchers at STORM Lab at the University of Leeds have come up with a tiny canular form of robot that can explore the smallest bronchial tubes in the lungs.

The nano tubiform bot measures around 2 millimetres in diameter. That happens to be two times the size of the tip of a ballpoint pen. The tentacle robot will be guided from the outside with the help of (external) magnets.

The idea is still in its conceptual stage. The researchers performed laboratory tests involving a 3-D replica of a bronchial tree (the bronchi and all of their subsequent branches) modelled from anatomical data.

In the subsequent level of research, scientists aim at investigating the efficiency of the tiny device in navigating through lungs.

As of now, the doctors use bronchoscope to visualise the inside of the airways for diagnostic and therapeutic purposes. The endoscopic technique involves a stretchy tube-like device, of nearly 3.5 to 4 millimetres in diameter. And it is inserted via nose or mouth and into the bronchial passages.

Since it more than 3 millimetres in diameter, it can not penetrate into the smaller tubes of the lungs.

Therefore, to delve into the lower levels of the bronchial tree, a catheter or fine tube of 2 millimetres in diameter is used. Yet, the manoeuvring part still remain a huddle for doctors because of the restricted freedom of movement.

It is to solve this problem that researchers suggest the magnetic tentacle robot as it’ll be much more manoeuvrable with degrees of freedom and external robotic guidance system that would be customised for each procedure.

Professor Pietro Valdastri, Director of the STORM Lab said that the shape of the tentacle robot can be magnetically controlled so that it can sync well within the bronchial tree anatomy. And consequently, it’ll venture into the inner most regions of lungs. This will become an important clinical tool in the investigation as well as treatment of lung cancer and other pulmonary diseases.

Magnetic tentacle robot will be an interesting development in detecting early stages of lung cancer and as well providing timely therapy.

The autonomous magnetic guidance system will by-pass the need of x-ray especially during the procedure being carried out.

Via: University of Leeds