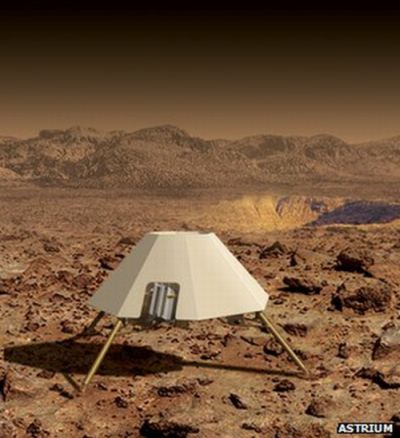 After the robo snakes, the European Space Agency (ESA) has come up with their innovative idea of launching CO2 powered hopping rocketbots that’ll forage fuel from the Martian atmosphere.

Power density has always played a major role in launching rockets especially when the chemical reactions take place. This is one of the reasons, why gasoline is employed in automobiles but the case is different with respect to rockets. While pushing satellites off from Earth, rockets require huge power, which sucks massive amount of fuel, and the same – although not in the same degree – is required for hovering around on surface of other planets, let’s say Mars.

Any rocket would require refueling to facilitate the workings for an extended period of time and researchers at the ESA is looking forward to make it a reality.

Since Mars is saturated with carbon dioxide so the idea is to create a rocket that imbibes the atmospheric carbon dioxide of Mars using a radioisotope thermal generator as a power source and steadily liquify it.

As soon as the carbon dioxide reaches a critical mass, the thermal generator heats up a tube containing pebbles (made up of beryllium and boron carbine). Carbon dioxide is then injected into the heated tube where it rapidly heats up, expands and finally fires out of a nozzle underneath the lander.

The entire process can make the lander go 26 kms in 12 weeks estimated the ESA.

It’s a magnetic system that many people might recall from science lessons at school. When you drop a magnet down a copper tube, you expect it to fall under gravity but it falls very slowly because, as the magnet drops, it creates eddy currents that generate an opposing magnetic field. Our legs would use this approach – a very simple, elegant solution that produces a damping effect. Nothing is crushed, and there are no fluids, which means we would be very insensitive to the environment and cold temperatures.

The idea is quite interesting and incredible concept; it would work wonders, especially if the robot has a self-righting mechanism.