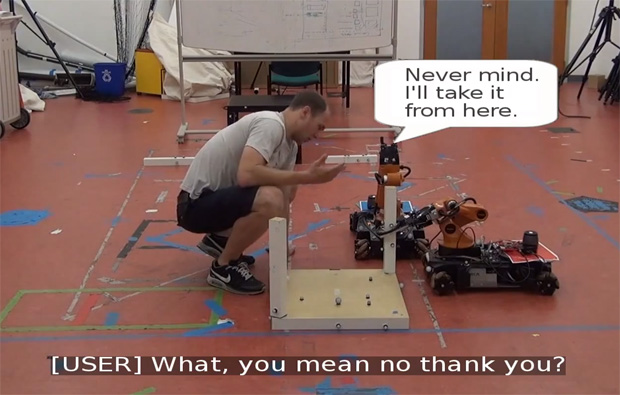 Finally, robots will be learning if not all at least some part of human language. Researchers at MIT are teaching robots to interact with humans in human language. Team at MIT taught a group of KUKA’s youBots to ask for help if they happen to face problems while building Ikea furniture. Once the bot determines failure of not completing the task or face some form of huddle which it think cannot pass, it would then call for request in a comprehensible manner. Bots would ask assistance in situations where the solutions to problems are not pre-programmed. Instead of going blank or over-riding the task, the machines would simply ask for help. Although it does sound simple when we take the case of building ready-to-assemble furniture but there is a hidden huge potential in the whole experiment. If self-autonomous bots are given the ability to recognize failure, they would revert to humans for help than over-riding the problem, which means humans will control the mechanical creations. Image Credit: IEEE Spectrum