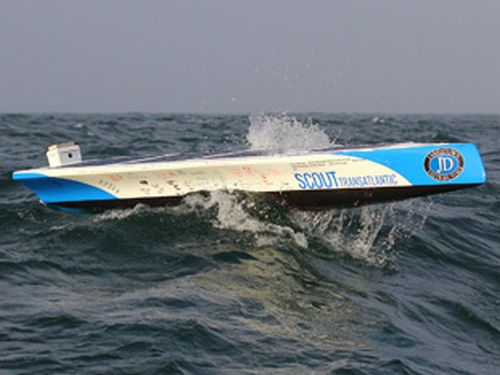 In 2009, scientists from Rutgers University launched Scarlet Knight, the first autonomous underwater vehicle (AUV). It was more of an oceanographic glider spending major portion of its time under the waterbed. Thinking on the same lines but with an improved version, a team of young DIYers, have created a 12 feet long autonomous robotic boat called Scout to face the transatlantic journey.

Unlike the Scarlet Knight, Scout would not be remotely controlled rather it would rely on its pre-programmed commands and information that it can collect about its environment through sensors. It is built to deal with anything the ocean can throw at it, and its status will be reported live online.

With the aim of covering 5900 kilometers, Scout has already covered a distance of 1600 kilometers.

Given the fact that Scout is moving in the ebb and flow of the water current than residing at the depths, it would definitely be considered the first robotic surface vessel.

Scout was being constructed in April 2012. Main body of the boat is made up of carbon fiber sandwiching Divinycell foam. Solar panels along with lithium-iron-phosphate battery are flanked on the top of the hull for powering the motor troll that is placed at the bottom.

During the daytime, the power for trolling will be generated by the solar energy, as when there would be lack of energy under less ideal situation, the boat will just drift on the water surface. With its angled upper deck and a heavy amount of lead on the bottom of the keel, the boat will make a self-righting mechanism, making it possible to endure storms.

Coupled with an onboard computer system Arduino, Scout is a fully ingrained with an ecosystem of its own. Arduino gets reset after every couple of hours, this will shield it from freezing up in case there happen to be a memory leak or other subtle problem with its code.

Clearing of flotsam, (an important part in journeying through waters) has also kept in mind. The boat stops and backs up a little ways after every 5 hours.

It has already journeyed more than a quarter, and I’m excited to see how it makes to the end, you may join me here. The only problem that I’m worried about is marine garbage but am hopeful that will cross over them too.