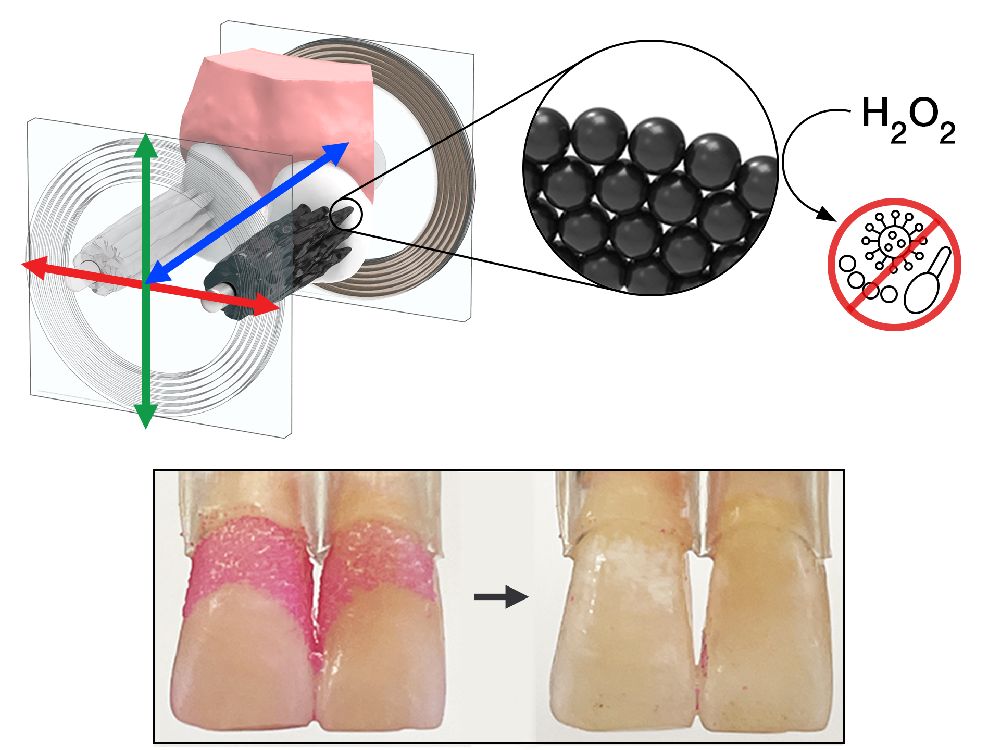 Toothbrush, or the heads per say, have not much evolved since ages, from rectangular they have only graduated to diamond shaped geometry. I really doubt how far does the new shape has been able to reach the teeth in the back. In the dental hygiene sequence floss, brush and rinse go hand in hand. And each step is an important and at times, cumbersome task especially for people with disabilities.

Researchers at the University of Pennsylvania have put in an effort to combine these three steps in one with the help of shapeshifting robotic microswarm. The tiny group of bots offer an automated way to carry out the everyday task of brushing and flossing.

People who lack the manual dexterity to perform the everyday task of dental hygiene with precision can find this technology a boon.

Microbots are configured via magnetic field

Iron oxide based these microbots are not only catalytic but also possess magnetic activity. The microbots are manoeuvred via magnetic field. Their configuration is customised within the field as well, for instance, the nano bots can form bristle-like structures to clean up the dental plaque from behind the surface of teeth and the same bots can transform into a string for flossing.

On the other hand, the catalytic process initiates the nanoparticles to induce antimicrobials that destroy the unwanted and harmful oral bacteria on site.

Edward Steager, a senior research investigator said that the robotic swarm acts like a robotic arm that reach out and clean the surface. Also, he added “the system can be programmed to do the nanoparticle assembly and motion control automatically.”

Experiments on model and real human teeth testified that the robotic assemblies can morph to various shapes – depending on the structure of oral cavity – and were successful in removing the sticky biofilms that cause cavities along with other gum disease.

This tech is the first of its kind that can do all three steps – brush, floss and rinse – in single, hands-free and automated way. As per Hyun Koo, a professor in the Department of Orthodontics in Penn’s School of Dental Medicine, the robotics system will assist those individuals who have hard time cleaning their teeth due to manual dexterity.

To increase the efficacy of tooth brushes, shape of the head of a tooth brush has been modified. Recent years have also seen adding electric motors to the basic ‘bristle-on-a-stick format’. However, fundamentally the concept has always remained the same. Therefore, the shapeshifting robotic microswarm could disrupt the contemporary oral care technology.

The innovation however was not aimed towards the obvious disruption. Researcher group in Penn Dental Medicine (Koo’s team) were working on the catalytic activity of the nanoparticles. They activated hydrogen peroxide to give out free radicals. These “free radicals” showed promising results in killing tooth-decay-causing bacteria and degrading dental plaque biofilms. 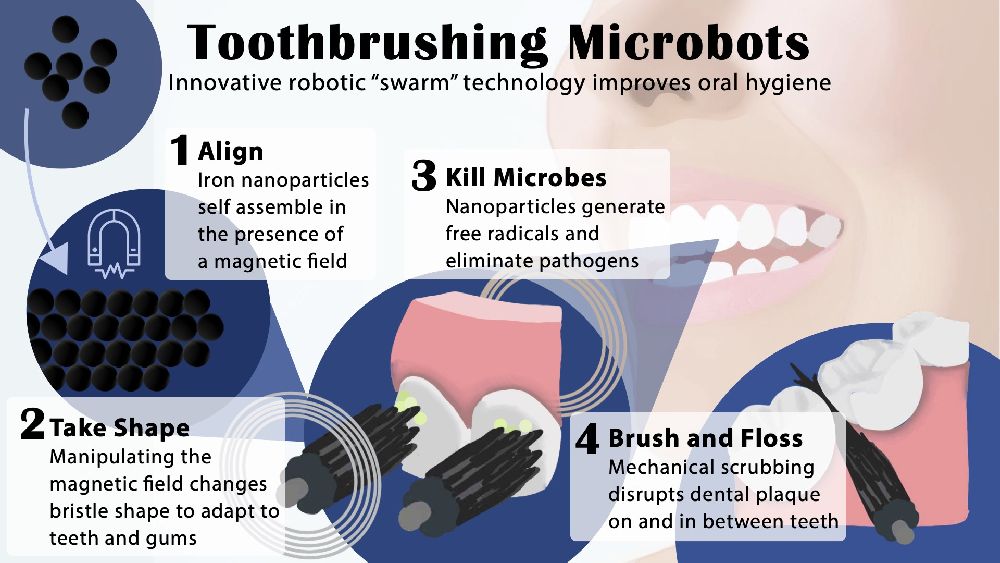 To optimise the motions of the nanobots, the researchers first experimented on a small chunk of tooth-like material. Then they inspected the performance on complex topography of the tooth surface, interdental surfaces, and the gumline with the help of 3D-printed tooth structures. The models were based on denture like structures derived from the scans of human teeth.

Ultimately the final trial of the microbots were performed on human teeth, which were mounted in such a way that the structure represented the arrangement of teeth in the oral cavity. Overall, the experiment yielded the following results:

Engineers worked with variations in the magnetic field to customise the motions of the nanobots and regulate the bristle stiffness and length. They concluded that the sharp end of the bristles can be made more firm to eliminate biofilms but at the same time soft enough to avoid damage to the gums.

The Penn team does not stop here, in fact, the researchers are working towards optimising the nanobots’ motion so that microrobots can be delivered through mouth-fitting devices. The device will surely be going to benefit patients.

Researchers envision that the revolutionary tech is here to stay. It is the customizable nature of the entire system that makes it personalized depending on the unique topographies of a patient’s oral cavity. Therefore, it can surely disrupt the oral dental care technology.

Via: University of Pennsylvania