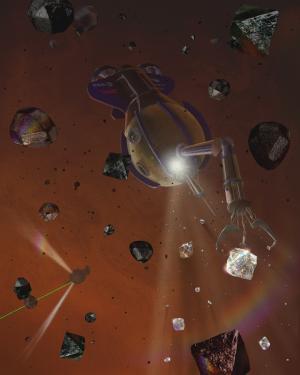 As per the recent planetary analysis scientists discovered that deep atmospheres of Jupiter and Saturn might hold large pieces of diamond floating in a mixture of hydrogen/helium fluid.

In order to understand the carbon allotropy with respect to diamond across temperature and pressure, the scientists behind the study plotted a phase diagram. This diagram was then combined with the new pressure-temperature statistics of Jupiter and Saturn. The grid indicated that diamond will be in a stable phase in deep interiors but below the region where the stability will not work, the pressure and temperature will escalate which in turn would melt the diamond morphing into diamond rain or liquid diamond.

We don’t want to give people the impression that we have a Titanic-sized diamondberg floating around. We’re thinking they’re more like something you can hold in your hand.

Soot and graphite, which happen to be the leftovers of lightning storms in the atmosphere of Saturn, would slide down into the planet crushing into the form of diamonds at deep altitude and morphing further into liquid diamond near the cores of the planet.

The study has confirmed that the cores of Jupiter and Saturn are hot enough to precipitate solid diamond unlike the cores of Uranus and Neptune. This further gives rise to a probability of diamonds may be floating around inside of Saturn. Women astronauts are you listening!