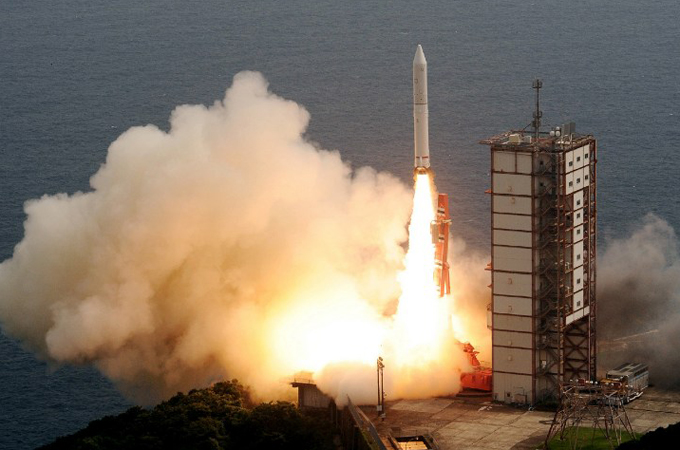 In order to create a mark in the international rocket – launching business, Japan has come up with their new rocket called Epsilon. As per the sources, Epsilon is a cheaper yet efficient solution of sending satellites into space.

This is the second rocket after H-II that the nation has launched to improve the reliability and minimize costs. The production of Epsilon has cost around a third of H-II. The reason being its latest computer machines, that can perform self-autonomous tasks, like keeping checks and assembling parts. In order to take a glimpse of solar system and remote observation of planets, the rocket is carrying a telescope in itself.

Epsilon was launched from Uchinoura Space Center, at 05:00 UTC on September 14, 2012, same space center which was used by Japanese solid-fuelled carrier rockets, Mu. The overall cost of the launch was $38 million.

Initially it was suppose to launch on August 27, 2013 but it was averted due to technical snag.

According to Wikipedia, the initial version of Epsilon has a payload capacity to low Earth orbit of up to 500 kilograms, with the operational version expected to be able to place 1,200 kilograms into a 250 by 500 kilometer orbit, or 700 kilograms to a circular orbit at 500 kilometers with the aid of a fourth stage.

No sooner Japan would be witness its own GPS system. Eight to eleven of the 30 US GPS satellites pass near Japan but renders ineffective because of its high rise buildings and mountainous terrain, therefore, they want to come up with their own Global Positioning Systems.

Success with these and Epsilon type of projects would bring about self-sustainable space transportation system for Japanese, which would further escalate their overall economic growth.