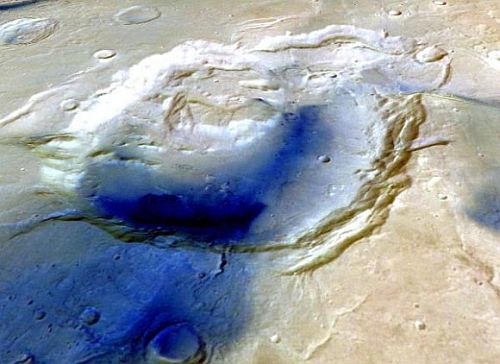 Basin that was previously thought to be a consequence of meteorite impact on the surface of the Red planet is in fact the remnants of an ancient flared up supervolcano, postulated by Joseph R. Michalski, Senior Scientist at the Planetary Science Institute and co-author Jacob E. Bleacher of NASA Goddard Space Flight Center.

In the words Michalski,

On Mars, young volcanoes have a very distinctive appearance that allows us to identify them. The long-standing question has been what ancient volcanoes on Mars look like. Perhaps they look like this one.

Capacity of the volcanic eruption is enough to give disastrous result in form of a complete makeover over the crust and its atmosphere. Talking on the same lines, Bleacher said, had this volcano erupted on Earth, the debris would have distorted the global temperature for years.

Depression that has caused from the explosion might escalate once all the material is evicted from it. Yellowstone National Park in the western United States, Lake Toba in Indonesia and Lake Taupo in New Zealand are some the examples.

Had these volcanoes been active once, Mars would have altogether a different story to tell.